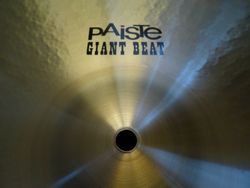 Introduction: 1967
Discontinued: 1974
Re-Introduction: 2005
Background: In the late 50’s Paiste experimented with the CuSn8 bronze alloy and pioneered CuSn8 cymbals in 1963 • In the 60’s the electrified sound generated was groundbreaking and popular music, simply stated, became loud and irreverent • CuSn8 bronze that Paiste worked on turned out to be perfect for the new soundscape with its amplified volume and frequencies • 1967 Paiste launched the Giant Beat cymbals, which are characterized by warmth, strength and brilliance drummers had not known before. A resurgence in vintage sounding cymbals was the catalyst in their re-introduction in 2005. Thin Giant Beats were added to the line in 2012.
Innovation: First cymbal series to be manufactured from the popular CuSn8 Bronze, “2002 Bronze”
Alloy: CuSn8 (Also known as "2002 Bronze")
Quality: Professional
Production: Manual craftsmanship • Hand hammering, hand lathing • Proprietary manufacturing methods
Applications: Soft to loud settings • Live and recording • Rock, Blues, Rock’n’Roll, Swing, Country, Garage Rock, British Rock and Pop, Beat
Users: Working musicians, enthusiasts • Drummers eager to re-capture Paiste vintage cymbal sounds from the late 60’s
Sound: Bright and warm with a multilayered, full, dark, glassily splendid presence. The following description was posted in the Paiste 1969 catalog:
"Continuing their search for new cymbal sounds and tone colors, the Paiste Development have now turned their attention to the problems and requirements of Beat Group and Big Band drummers.
As the result of extensive consultations between Paiste Technicians and top line drummers in these fields of music, Giant Beat cymbals were evolved.
The obvious problem of the Beat or Big Band drummer is competing with the sound of the amplifiers or a large number of musicians around him - GIANT BEAT CYMBALS provide the answer!
The production of GIANT BEAT is considerably different to the technique normally employed. Each GIANT BEAT cymbal is passed through a unique hardening process to insure it will stand up to the rigors of continuous heavy playing - this process combined with the way in which the cymbals are shaped, hammered and annodised, finally produces a set of cymbals with a sound capable of cutting through the loudest of Groups or Big Band sections.
Although GIANT BEAT cymbals can be purchased individually, they are offered in tuned sets - Matched 15" Hi-hat, 18" Crash and 20" Ride.
GIANT BEAT cymbals with their distinctive SOUND, SHAPE AND COLORING are fast growing in popularity - try them soon you will be impressed."

Information from the Paiste.com site[1]