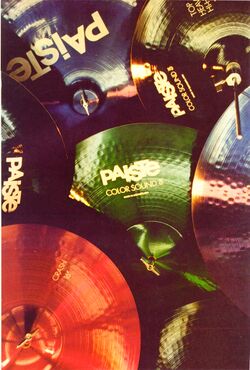 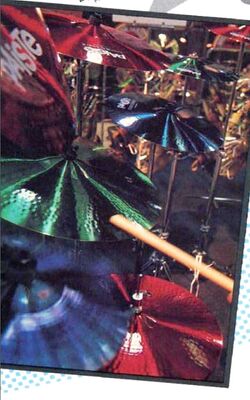 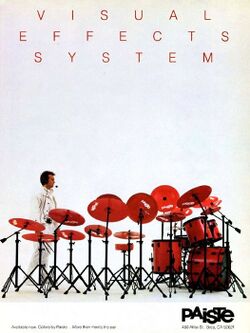 
Background: Paiste is the first company to introduce "color" cymbals with original "colorsound" coating.
"Paiste first pioneered color coated cymbals with COLORSOUND 5 in 1984 as a means for artistic expression during the time period when popular music became visual in music videos on television."


Origins: The Color Sound 5 idea started when Nick Mason asked for gray cymbals to accompany Pink Floyd's the “Wall” Tour in 1981. Robert tried several ways to color bronze. Galvanic way: just a pale yellow or a bad looking maroon. Chrome plating: harsh, brutal sounds, and the chrome cracked! Spraying the color on choked the sound, Robert told Nick to forget about gray cymbals. As usual, Robert kept trying, he found a special transparent lacquer used on copper wires used to make bobbins for electric motors.
Originally, it was supposed to be 5 colors, but white was not coming out as intense unless the cymbals were sprayed several times, causing the sound to choke, so Robert decided only 4 colors rather than 5.
Paiste introduced in 1984 the newly established Line called “Colorsound 5”. Initially the available colors were only four: black, blue, green and red, also as a custom order: white, yellow, turquoise, and purple were produced.
Officially the Line was released from 1984 to 1986 (it was absorbed into the 2000 Line after that)
The "CS5" were made from modified 2002’s which were slightly higher in pitch to compensate for their dryness from the color coating.
Paiste intended this as a fully professional Line, they have a dry, quick, yet punchy sound and a medium to short sustain due to their coatings.
Originally they were only made in Germany, in 1985 the Switzerland plant also produced them.


Sound: Dry, quick, punchy sound. Medium to medium short sustain in general due to the coating