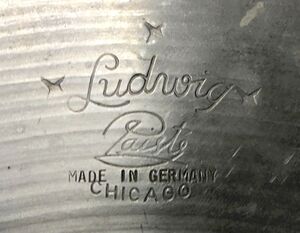 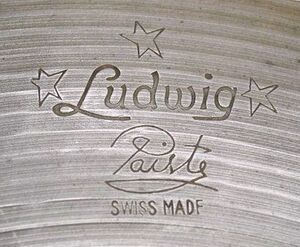 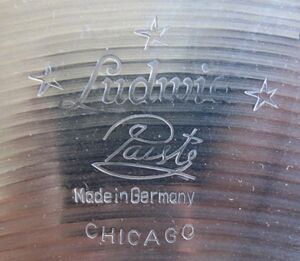 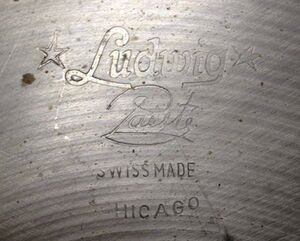 Introduction: 1956
Discontinued: 1964 (last listed in Ludwig '64 catalog, replaced by the "Ludwig Standard").
Background: Robert Paiste recalled during a 2006 interview that the Ludwig family sent "care packages" to the Paiste family after W.W. II, this indicates that Bill Ludwig Sr. possibly had a relationship with Michail Paiste before the war. Bill Ludwig Sr. took a trip to Nenderoth, Germany to visit his childhood home around 1955/56, afterwards he attended the Frankfurt music fair where met Michael M. Paiste, the relationship soon developed into orders for 20,000 cymbals per year!
From the 1957 catalog, a less expensive PAISTE series is offered in addition to the higher-quality Zildjians, under the name "Ludwig". Ludwig "3 stars" (Robert Paiste has stated that that the 3-star was a rebranded NS12 Stambul sold to Ludwig for North American distribution).
They are first made in Germany (with the addition of "CHICAGO" on the stamp), then during 1957 and later in Switzerland, all were made of Nickel Silver alloy NS12.
There is proof of several different embossed logo variations: the 3-star cymbals without a country of origin were German-made (the German factory was the original post WWII production facility), we do know that any of the Ludwig 3 stars with the location name of "Swiss Made" or "Swiss" were made from 1957 and later.
One should compare the old Ludwig logos that are shown through their history, as this will help to show similar dating in these earlier days.
We have found several indicator features to help identify general date ranges:


Indicator #1: Font format and font style: There are two general formats being used (a script line-form or a hollow block-form). In addition, most of the lettering is shown (detached or separate letters), but one version has an cursive style or attached letters. See the Logo pictures to the right for a visual reference.


Indicator #2: Star Tip Count & Locations: Although there is only one example of tip count variance found so far, we have noticed the locations and angles of the stars have slightly changed over these years. It's unknown if this really matters towards dating, but it may give a clue. Most Ludwig 3 Stars have a 5-tips (points or ends), but there is one variant that has 4-tips.


Indicator #3: Font Style: There are two styles being used (with flared letter tips/ends) and (non-flared letter tips). You can see the "flared" tip lettering in the "u", "d", "w" and "i" of the Ludwig name.


The following is a guesstimate approach to a general timeline of the 3 Star use:
LOGO (A): This is likely the 1st. version used, as it is still in narrow script line-form, but changes to a 'cursive' lettering style and it includes three stars around the top and ends of the "Ludwig" name. Just under this, included the signature "Paiste" name. Most of these cymbals show two locations: "Germany" over "Chicago". At the time, Ludwig's distribution (based in Chicago) was for the American market.

LOGO (B): We believe this might have been used at the Swiss factory from 1957 and later. It uses a script line-form that is wider than the original script used in "Ludwig". The lettering is detached and has no flared tips. The usual three stars are in place around the "Ludwig" name, which is over the "Paiste" signature. Under this is typically the production location name.


LOGO (C): This is likely the last version of logo stamps used. We believe Paiste transitioned the font types from a script line-form over to a 'hollow' letter-form. They also used detached lettering with 'flared' tips, three stars around the "Ludwig" name, signature "Paiste" under "Ludwig", and the location name varied.


From 1957 and after, these sizes were believed to be offered: Thin, Medium, Heavy 10" through 22" Designated as Band, Ride or Hi Hat.
It should be noted that Ludwig ordered a mass of cymbals shipped to their Chicago warehouse and from there, they mix and matched destined pairs of cymbals.
Again, until we find the missing documents to help better identify some of these characteristics, we can only surmise. 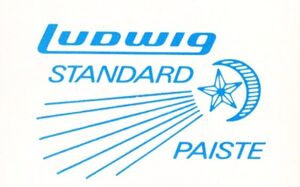 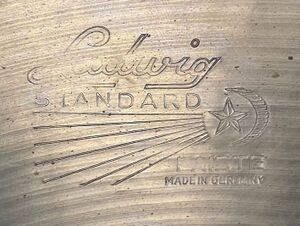 Introduction: 1965
Discontinued: 1972ish, but listed in catalogs until '75
Background: A joint venture by Ludwig and Paiste, the lower midline Ludwig Standards first appear in the 1967 Ludwig catalog, the cymbals were originally made of the NS12 alloy in both the German and Swiss factories before getting an upgrade to B8 around 1971. Well-preserved Ludwig Standards will have a red ink type stamp at the 3 o'clock position and later period (post '71) B8 cymbals also have a black ink Paiste logo above the bell. It is now known that the Ludwig 3-Stars are actually the first generation of Ludwig "Standards", both are rebranded Stambuls. Ludwig didn't actually start using the name "Ludwig Standard" in its materials until 1965 and this could be when they started embossing the cymbals with this new name/logo.
We have been told by those at or close to Paiste that they stopped making cymbals for Ludwig in the early 70's ('71 or '72) after Ludwig cancelled thier contract without notice, the Ludwig Standards last appearance comes in the 1975 Ludwig catalog in limited size options as these cymbals are most assuredly leftover stock.
We have examples of no serial # B8 Ludwig Standards that were stamped with post '71 ink stamping as Stambuls and sold off after the deal with Ludwig collapsed!
Alloy: Nickel Silver NS12 - "B8" CuSn8 (after about 1971)