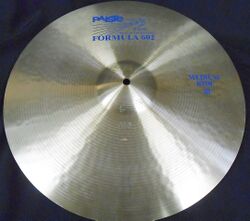 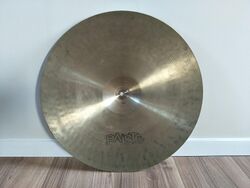 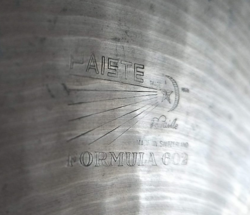 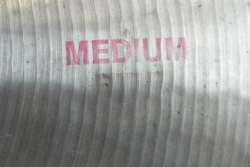 
The Medium Ride shown here has a typical weight (1738g) and the typical ink pattern for 1976. The RIDE portion of the red model ink is a little faint, but present. The embossed trademark is the Outline form which is associated with the Black label serial number period (1972 to 1981). The ink stamps on the bottom are the diameter in black ink 18" and the pAisTe in outline form. The ink on the top side also includes the two line pAisTe Formula 602 ink stamp between the embossed trademark and the bell.

Weight comparisons for some other 18" Fo602 cymbals:

Note that this comparison of models and weights needs to move to a page where other diameters are also included but it has been placed here for now.


On present evidence Paperthin are a different range from Thin Crash, but Thin Crash and Thin overlap. Similarly Medium and Medium Ride weight ranges overlap. The Medium/Medium Ride weight ranges are distinct from the Thin/Thin Crash ranges. The Heavy weight class is distinct from the Medium/Medium Ride weight ranges. In order to distinguish a Thin Crash from a Thin once the model ink has gone we would want more then just weight. In order to distinguish a Medium from a Medium Ride we would want more than weight. Research is ongoing to determine if knowing production era (Preserial, Black label, Blue Label, Reissue) can help in the general case. It is also likely that the differences in sound and feel are due to shape and weight distribution not just weight itself. Work is ongoing to assess the profile (curvature of the bow) and taper (thinning of the metal towards the edge) which might inform that understanding.