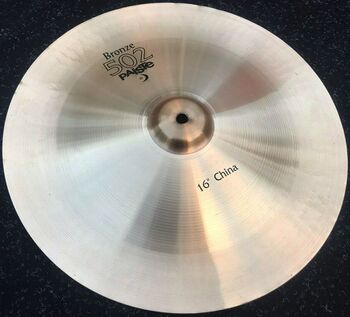 Introduction: 1993
Discontinued: 2003
Background: 502 & 502 PLUS series, first unveiled in 1993, discontinued in 2003, they received “major” improvements in 1997 and the addition of the Plus.
Made from our CuSn8 bronze, as the 2002 a, 802 and Alphas. Meant as mid budget level below the 802 Line and above the 402, 302 and 101 Lines.
Significant, according to Paiste was the surface texture treatment done to improve their sound performance and save costs while manufacturing.
Only a few models were available in this mid budget level to cover the basic needs of the Student drummer it was aimed at to supply.
The cheapest Line to get access to the B8 alloy and their sound properties for those who preferred the alloy.


"Since 1947, Paiste has been unrivaled in its ability to produce quality value class instruments. Our knowledge and experience in cymbal making has allowed us to design and produce quality instruments with proper sound and function at any level. With the help of automated tools, we craft our intermediate and entry level cymbals according to our traditional exacting specifications. First unveiled in 1993, our 502, 402 and 302 cymbals received major improvements in 1997.
Made from our CuSn8 bronze, new 502's are significantly improved in sound, function and optics, yet are made more affordable, allowing more drummers and percussionists access to Paiste quality in a bronze cymbal. In addition to their trusted projection, vibrant resonance and musicality, 502's gain warmth and complex harmonics due to their improved features." (1)