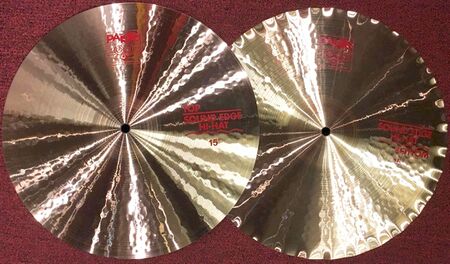 Years of production: 1971 - Present
Sound file: 2002 15" Sound Edge Hi-Hat
2002 15" Sound Edge Hi-Hat
2002 15" Sound Edge Hi-Hat
2002 15" Sound Edge Hi-Hat
2002 15" Sound Edge Hi-Hat
2002 15" Sound Edge Hi-Hat
2002 15" Sound Edge Hi-Hat Reflector Finish
Paiste's Description: <<< - >>>
Review: Very articulate and bright. Sharp chick, sizzling, fast open wash that roars as well. It has very good sticking qualities as well.
Review written by go3tz
Review: I still have a pair of 2002 14" SE hats from 17 years ago, and I've never sold them b/c they are so wonderful. Problem is, there is a hair-line crack in the top one, so I retired them and got the Bosphorus pair a couple of years ago. The Bosphorus hats were very nice, but I wanted a larger, fatter, more full sound from my hats. Mission accomplished w/ the 15" SE. I feel like my hat-driven grooves were bigger sounding, and I didn't have to lay into them at all...they definitely do the work for you. The 15s are a little darker then the 14s, but they are also more "present" due to their size. I personally think that the 2002 Sound Edge hi hats might be some of the best cymbals ever made by any company, period. My 14" pair are still playable and I think I'll use those and the 15" pair for recording and playing live forever.
Review written by almamadre
Review: Curiously articulate for a 15" hi-hat, 15" surface gives you few different closed hi-hat sound options as you move towards the bell the stick sound gets drier and moving toward the edge stick sound gets larger. The spread of stick sound also varies considerably with the foot pedal pressure. So with combining pressure level and playing surface you'll have variety of colours in your disposal with just 1 (one) hi-hat! As for the open hi-hat sound, it is a gift from god really , huge sizzly bright wash which can be brought out with just little force really. This is what makes this one a versatile hihat it can function in both loud and quite parts. Furthermore the chick sound is just has its own league, big bright powerful. I've just recorded the drum parts for a song of ours and it came out fantastic! No processing is needed, great sound both live and recorded.
Review written by Cem KIBRISLI (ckibrisli)
Review: John Bonham played these for a reason. I don’t think I need to add much more than that.
Oh go on then. In case you hadn’t already realised I’m a fan of large cymbals. I find they have just that much more character. And this is certainly the case with these. They go beyond just a timekeeper with a chick and turn into instruments with a wealth of sound all of their own.
That sound edge bottom is fantastic. The chick on these is bright but lower pitched enough to not take your eardrums out.
Played tight closed they are as articulate as its possible to get.
Played half open that articulation is there but these are ROARING along. This is when you really start to rock out and bob your head. Man, you are now officially grooving and you are in command of the song!
Played wide open the crisp nature of these hats hits you like a brick in the face. The volume is loud, they’re roaring like the bastard offspring of a Siberian tiger and a V8 yet with every stroke this razor sharp crispness slices across the soundstage like a scalpel. Its mouth watering stuff.
These were built for hard rock. They’ll fit in pretty much any genre but hard rock is where they are just perfect.
Like I said, John Bonham played these for a reason.
Review written by Stuffed Chimp
Artist/song where it can be heard: Airto, Carmine Appice, Rod De'Ath, Peter Backhausen, Barriemore Barlow, Frank Beard, Francisco Belenguer, Charlie Benante, Alvino Bennett, Steve Berrios, Brant Bjork, Art Blakey, John Bonham, Paul Bostaph, Clive Bunker, Jimmy Bower, Bill Bruford, Matt Byrne, Scott Carneghi, Jim Chapin, John Coghlan, Brian Davison, Jimmy DeGrasso, Düde Dürst, Mick Fleetwood, Al Foster, Sonny Freeman, Ringo Funk, Beaver Harris, Jon Hiseman, Ronald Howden, Joseph Jarman, George Johnson Jr., Russ Kunkel, Abe Laboriel Jr, Matt Laug, David Lauser, Dave Lombardo, Heinz Niemeyer, Mani Neumeier, Ian Paice, Carl Palmer, Prairie Prince, Bobby Rondinelli, Allen Schellenberger, Michael Shrieve, Claudio Slon, Alex Van Halen, Edward Vesala, Jimmy Bower, Scott Carneghi