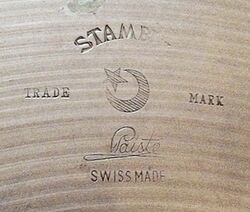 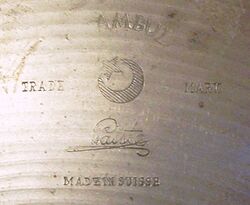 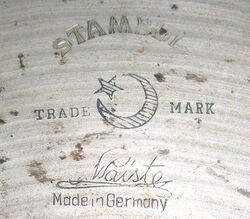 made in Germany, post '57 after the Swiss factory came online (this is a "narrow stamp" version) 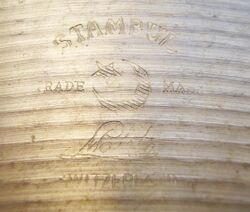 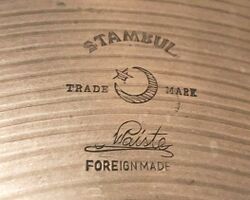 "narrow stamp" "foreign made" English import, most likely by Arbiter


As far as the dating and where these cymbals were made, the following provides a basic timeline *(we do not have any documentation that precedes 1950):
1932-1940 (Estonia) no records
1940-1945 (German occupied Poland)--relocation during WWII, small production, alloy supplies allocated by the German government
1945-1948 (Germany)--relocation after WWII, no production, war refugees
1948-1957 (Germany)--production restarts once again after receiving initial business capital
1957-1977 (Switzerland & Germany)-- production increases exponentially


The Stambul line was considered Paiste's top-of-the-line cymbal prior to the Formula 602 release in 1959, where it took a second place position after that.
Dating and identifying Stambuls, like other cymbals of this time frame are a real challenge, as there are only a few means to physically evaluate a time period. We have provided a few indicators to help narrow down date ranges.


Indicator #1 Alloy Type: NS12-Nickel Silver was used from 1930's (estimated) or at least from 1948 through about 1972 (B8 was utilized on virtually of the lower line cymbals by about 1972), there many examples of post '71 NS12 Stambuls, most likely these were produced pre '72 and then stamped with ink logos and released post '71.


Indicator #2 Mounting Hole Size: Most cymbal stands started to be changed/made stronger by 1957 or 1958, as many drum companies started this trend with their hardware. Todays mounting holes are 1/2" diameter, but previous sizes ranged from 7/16" to 3/8" diameter. This indicates that the cymbal was made most likely prior to 1960.


Indicator #3 Distinctively Larger Bell: Stambuls had a much larger bell than what is now a common size (see pics below). This is shown in the 1950 and 1952 catalogs, we aren't exactly sure when the downsizing of the bell took place, it's possible that smaller bells transitioned in with the new release of the Stambul 65's in 1965 or possibly earlier.


Indicator #5 Location Name: We believe this can be helpful as an indicator because if the logo had no location shown, it was either an earlier model (pre-1957) or one used later towards the end of the production runs (1970-1977). There were 2-3 different location names used for those cymbals made in Switzerland. Germany only used "made in Germany". The following show the variations for Swiss made cymbals:


As far as the embossed Stambul logo, we are fortunate that the overall logo style did not change much over the entire life of the Stambul (see logos to the right). It's design uses a large size, hollow block letters with 1 or 2 thin vertical lines through each letter spelling out "Stambul". This name was all set on a curve or arc form above the logo components. Below this was the Star and Crescent pattern that was tilted so that the star was in the 10-O'clock position with varying cross-hatchings through its interior. The words, 'Trade' and 'Mark' were set to the outside of this logo: "Trade" on the left of it, and "Mark" on the right. Underneath this was the signature "Paiste" name, it was actually shown with part of a lower-case "m" at the "P" location, representing Mikhail M. Paiste.

Provided below is a simple dating chart:


Early 1950's :
small (7/16") mounting hole, and 'possibly' (5 or 6) cross-hatchings in the star and (13 or 14) in the crescent and no location identified. Additionally, the 'Trade' and 'Mark' are spaced farther away from the logo work during this time frame, we call this the "wide stamp".

As far as Stambul models, weights and sizes, this is what the research has shown (see catalog pictures below):