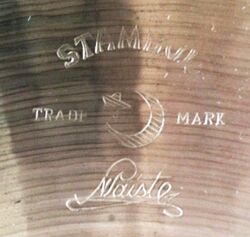 late version B8 stamp with no production location

Introduction: about 1971
Discontinued: 1978
Background: From a Paiste catalog: "Careful craftmanship and choice materials, these are the ingredients which give STAMBUL cymbals their characteristic tone, resonance and response. They offer high quality and professional features at a reasonable price. Available in a wide range of sizes and in three weights: Thin, Medium and Heavy."
Starting in about 1956, the Stambul was relabeled and sold in U.S. by Ludwig as the "3-star Ludwig" and later the Ludwig Standard. Around 1971/72, Ludwig unceremoniously dumped Paiste as a supplier without notice, there were many leftover NS12 and B8 Ludwig Standards reinked as Stambuls (see example below!) and sold off as late as '72 or '73.
The switch to B8 came mostly during the "the great B8 shift of 1971/72" where Paiste's lower lines were switched from NS12 to B8. We have found that the switch to B8 didn't happen overnight, many leftover NS12 Stambuls were given full ink stamps starting in 1972 so they are hard to tell apart from the B8 versions.
The current thinking for the B8 version is that they copied the manufacturing techniques and sound characteristics from the Stambul 65 series (they both existed concurrently before the "65" was discontinued in late '73). Research shows that Paiste Nottwil put serial numbers on the lower lines in 1972 and 1973 and then stopped this practice in very early 1974. In addition, We have seen examples of German made Stambuls with serial numbers, so far they've only had a 1977 production date. Many leftover B8 Stambuls were relabeled as early 505's, especially from the German factory (see below).
Alloy: CuSn8 (Also known as "2002 Bronze")
Quality: intermediate, semi-pro to professional use
Production: These cymbals were fully hammered into shape, not stamped, the same production techniques were used as they were on the top line cymbals.
Applications: All types of music, particularly pop and rock
Sound: Similar in sound and construction quality to the Stambul 65, softer sounding and less aggressive than the 2002.