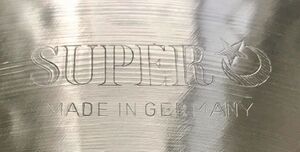 No location under the name


Background: First known Paiste SUPER advert was in the PTM magazine - Jan-June 1965 - likely printed in 1964 (see below), we are pretty positive the Super line was released in 1964, discontinued in 1978. The Paiste SUPER (not to be confused with the precursor to the Formula 602, the B20 Super Formula 602) was a long-running, low-priced cymbal that slotted in below the Dixie in the Paiste lineup for most, if not all of its history.
It is speculated that the SUPER was first made in Germany starting in 1964, after the Paiste Standard line was discontinued, then the Swiss factory also made NS12 Supers for a short period of time (1967-1972?) before both factories made the B8 version starting sometime after 1971.
Production of the B8 Super ceased by 1974 in the Swiss factory - the cymbal was still available from the German factory (in very limited sizes - 14", 18" and 20") until 1978 when it was replaced by the 101.
The Supers made in Switzerland in 1972 and 1973 were given serial numbers (at least some of the time). The "black label" era Super cymbals ('72-'78) will have a black ink Paiste logo stamped near the bell (unless it has faded or been cleaned off) and the black "type" stamp ink.
The late period Supers (post 1975) from Germany had black type stamp ink and serial numbers, we noticed that the German factory reverted back to using NS12 for Supers in '76/'77 (confirmed with serial #'s), most likely in preparation for it's replacement; the NS12 101.
Innovation:


Applications: The budget Super was a "universal" cymbal suitable for crashing and riding.