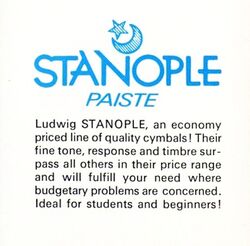 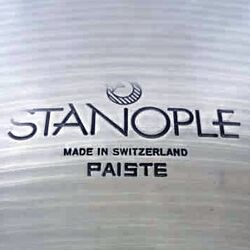 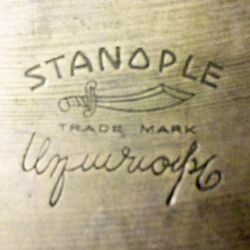 
Background:
The Stanople was a low-priced cymbal ideal for the beginner or student drummer that was eventually (or perhaps always) carried by Ludwig as a cheaper alternative to the Ludwig Standard. Little is known about the origin of the line as it does not appear in any of the Paiste literature we have compiled to this date.
The 2009 Paiste timeline gives the start date as 1950, but the line isn't listed in any of the 1950s era catalogs we have in our possession.
This doesn't necessarily mean the start date from Paiste is wrong. What it likely means is that the Stanople was always a cymbal strictly intended for export to the U.S. and not sold in Europe by Paiste.
It would seem Paiste did not list cymbals falling into this category (Ludwig Standard, Zilket, etc.) in its own catalogs.
Going off the available sizes and weights we would say it is quite possible the Stanople may be the American version of the Paiste Dixie.
According to Paiste, the Stanople was made of NS12 up until 1956 in the German factory before production switched (or started to run concurrently) to Nottwil in 1957.
The timeline has the cymbal as being made of NS12 for the entirety of its existence, but it looks like the late period cymbals might have been made of B8 (see pics below).
The first appearance of the Stanople in print finally comes in the 1967 Ludwig catalog (which was actually printed in the Summer of 1966) where it is listed as a "new, economy line of quality cymbals."
This is an interesting bit of wording, does this simply mean the line was new for Ludwig or is the Stanople not as old as Paiste makes it out to be? It would seem the best answer is the former, but that begs another question.
How was the line getting sold in America prior to 1966? Was Ludwig importing the Stanople, but not listing it in its catalogs? Was Paiste exporting the line directly?
Or was another entity handling the Stanople prior to the 1964/65 deal that made Ludwig the exclusive distributor of Paiste in the U.S. and Mexico?
Actual production of the Stanople is said to have ended in 1970 when Paiste reportedly stopped making cymbals for Ludwig. The line was however, offered in the Ludwig catalogs until 1973.
It doesn't appear that the Stanople ever had the Ludwig name as part of its emboss logo. It was seemingly always embossed as a Paiste with an accompanying Made in Germany or Made in Switzerland.
Stanoples made around 1970 will have the red ink type stamp and a black ink Paiste logo stamp near the bell.
Research points towards 1971 being the year that Paiste switched up the alloys on the lower lines from NS12 to B8 (most likely to go along with the release of 2002 so they could buy B8 in bulk).


Applications: Ideal for the beginner or student and are particularly useful in the grade school band, or small combo