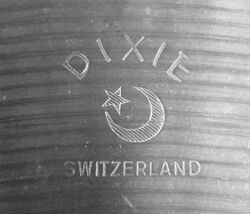 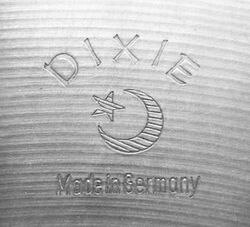 Introduction: 1963/64
Discontinued: 1978
Background: The Dixie was introduced in about 1963 as a lower-priced NS12-Nickel Silver series below the Stambul, (the Standard was the predecessor to the Dixie, pre 1963).
First known Paiste Dixie advert in the U.S. was in the "PTM" (piano tuner) magazine: Jan-June 1965, likely printed in 1964 (see below). The switch to B8 came mostly during the "the great B8 shift of 1971" where Paiste's lower lines were switched from NS12 to B8. We have found that the switch to B8 didn't happen overnight, many leftover NS12 Dixies were given full ink stamps starting in 1972 so they are hard to tell apart from the B8 versions.
Starting in about 1966, the Dixie was relabeled and sold in U.S. by Ludwig as the "Stanople". Around 1971/72, Ludwig unceremoniously dumped Paiste as a supplier with out notice, there were many leftover NS12 and B8 Stanople's relabeled as Dixies (see example below!) and sold off as late as '72 or '73.

Alloy: NS12-Nickel Silver ('63 - '71ish) - CuSn8 (Also known as "2002 Bronze") ('71-'78)
Quality: Entry-level series
Production: These cymbals were fully hammered into shape, not stamped, the same production techniques were used as on the top line cymbals.
Applications: Dixie cymbals are made with the usual Paiste precision and care. This line offers excellent sound and response. Ideal for the beginner or student, who wants a quality product without a big investment.
Sound: B8 Dixies were similar in construction, sound and quality to the later 404's that replaced them in 1978.

Lineup as per July, 1970 Paiste Price Sheet and 1974 Paiste Catalog (Second generation NS12 and B8 Dixies):

Lineup as per 1976 Paiste Catalog (this applies to late period Germany-made B8 Dixies only - Swiss factory carried on with second listing of sizes and types):

(**)The above lineup probably started in 1975 and runs until the end of production and replacement by 404. It is unclear whether the smaller sizes that were formerly exclusive to the Medium Thin designation (10" - 16"), now discontinued, were made heavier to better "qualify" as Crash Rides or whether they stayed the same weight and were just stamped differently in an effort to simplify things as production wound down. German Dixies from 1975 on got black type stamp ink instead of the earlier red.

Return to the Paiste Series Portal