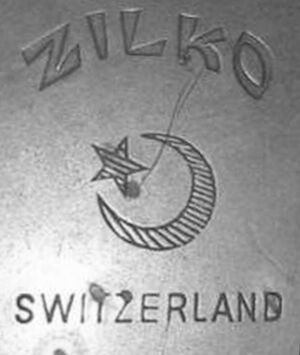 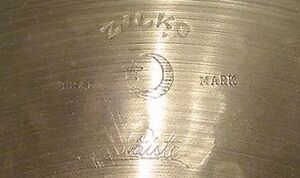 Introduction: Post war Germany, possibly 1948 when Michail started production again.
Discontinued: 1958ish (replaced by the NS12 Zilko standard)
Alloy: Brass MS63
Quality: economy or general, mid-level cymbal
Background: Paiste relocated to Germany in Jan. 1945 and most likely started Zilko production in 1947/48, they were produced using MS63 (brass alloy). We do know that these cymbals were not considered, top-of-the-line, rather they were intended as an economy or general, mid-level cymbal.
We don't exactly know what Paiste originally offered size wise (pre 1950), however here's what we do know and includes the following types and sizes:

Note: there is no "TRADE MARK" to the sides of the moon and star, there is also no "M. Paiste" signature, at some point, those elements were added to the German made Zilkos

Introduction: about 1958
Discontinued: 1959
Background: Most likely the name change occurred when Paiste switched from brass to NS12, The current thinking for model progression is: Brass Zilko from '48 to '58: (Swiss plant produced brass Zilkos for a short period), '58 to '59: change to NS12 alloy, name change to Zilko standard, '59 to '63: renamed "Standard" (also made from NS12) then replaced by Dixie in '63. It's unclear on the stamping variations, but Paiste confirmed they are the same cymbal regardless of how the logo was applied.
Alloy: Nickel Silver
Quality: Budget, student, entry level

Introduction: about 1959
Discontinued: 1962/3 (replaced by the Dixie)
Background: Not to be confused with the "Ludwig Standard" line of cymbals, these were produced before the Ludwig's but the name could've been transferred post 1963 (Paiste had a bad habit of reusing names for different products of different quality).
We have proof of the "Standards" existence from the back cover of a early 60's catalog (see below), unfortunately, we do not have the inside pages to the catalog, so we have no data on types and sizes offered on this series, early 1960s catalogs need to be found to answer these questions, Paiste customer service has confirmed they were made until around 1963 or so, then replaced by the Dixie.
We do know that the Standard series had 14" hi-hats and an 18", whether it was a crash or a ride, we do not know and a 16" crash, as part of their offering.
Alloy: Nickel Silver
Quality: Budget, student, entry level 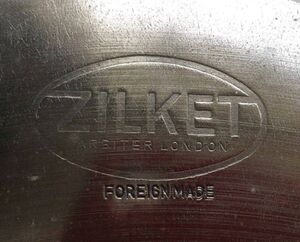 Introduction: 1965?
Discontinued: 1974?
Alloy: Nickel Silver - CuSn8
Background: The only records we have are from the mid-1960's to the early 1970's and they were from distributor catalogs & price lists (Arbiter lists them in thier '71/'72 catalog). Due to the time frame, it's most likely that the early versions of this cymbal line were made of NS12 (Nickel-silver alloy), then later, post 1970 from B8 (most of the conversion from NS12 to B8 took place around 1971). Arbiter Zilkets were most likely rebranded Supers. We do know they were made for beginners, advanced students, schools and small combos. The following types and sizes were available during this time frame:
ARBITER Ltd. '66 PRICE LIST: (No weight designated)
11" through 16", 18", and 20" 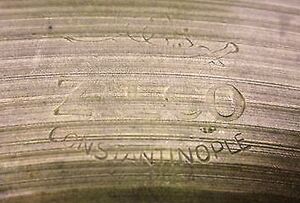 Not to be confused with Paiste's "Zilko", Zildjian's "Zilco" was spelled with a "C" instead of a "K". They were released in the 1930's well before Paiste's Zilko was but they were not a separate "standalone" line of cymbals: "Starting in the late '30's the Zilco name was used on cheaper Zildjians that were about a quarter of the price of the regular line. Zilcos were A Zildjian quality control rejects that were re-sold cheaply, including the Swish cymbals and others sized from 9˝ to 12˝."
VINTAGE CYMBAL HISTORY: ZILDJIAN'S “CHEAP” ZILCO CYMBAL LINE