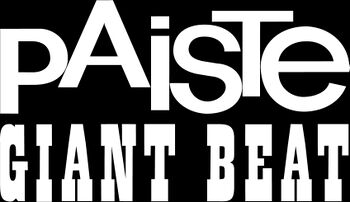 
Background: A resurgence in vintage sounding cymbals was the catalyst in their re-introduction in 2005.
We have learned from a 1st. hand account that in the early 2000's there was a custom order placed for a full set of Giant beats by a German drummer who was a Bonham fanatic, at the same time, drummer Steve Jordan was visiting the factory and saw them, he tried and liked them so much he placed a "custom order" set for himself! After several of his drummer friends heard Steve's cymbals, they placed orders as well. It is believed that this new interest in this long discontinued series is what encouraged Paiste to reissue the series!


Innovation: First "fully professional" cymbal series to be manufactured from the popular B8 Bronze, “2002 Bronze” (Stambul65 was considered a mid line cymbal).

There were 2 different embossing/logos: the first (white label) had the star, crescent (with 15 -17 cross hatches) and sun rays with the "Trade Mark" over the top ray in smaller lettering. The "Paiste" name was below the star & crescent, with the location "Made in Switzerland" under that. A similar logo was used on the Ludwig Standard cymbals around the same time, the difference being "trademark" was replaced with "Ludwig Standard"

1971 the Black label logo changes: "Paiste" name at very top in large lettering, sun rays, star and crescent (with 15 cross hatches) under it. The "Trade" and "Mark" were aligned to the outside of the star & crescent where the "Trade" was underneath the "E" in Paiste, and "Mark" was off to the right side of the crescent. The "R. Paiste" signature was under the star & crescent and "Made in Switzerland" was underneath that. This same logo was used on very early 602's, it was known as the "E over trade" stamp. 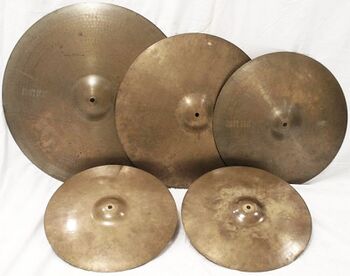 
Background: Robert Paiste had started to experiment with B8 alloy as early as 1963, he was looking for a replacement for the then currently used NS12 (Nickel silver) alloy.
He first produced the "Stambul 65" an upper mid line series that was originally intended to replace the Stambul series (it did not). Because of B8's sound characteristics ( strong midrange, bright high end), he believed this would be the perfect alloy to make cymbals to suit the burgeoning Rock’n’Roll movement and louder amplified music in general.

Innovation: Paiste's first professional level series to be made from B8 bronze.


The following description was posted in the Paiste 1969 catalog: "Continuing their search for new cymbal sounds and tone colors, the Paiste Development have now turned their attention to the problems and requirements of Beat Group and Big Band drummers. As the result of extensive consultations between Paiste Technicians and top line drummers in these fields of music, Giant Beat cymbals were evolved.
The obvious problem of the Beat or Big Band drummer is competing with the sound of the amplifiers or a large number of musicians around him - GIANT BEAT CYMBALS provide the answer!
The production of GIANT BEAT is considerably different to the technique normally employed. Each GIANT BEAT cymbal is passed through a unique hardening process to insure it will stand up to the rigors of continuous heavy playing - this process combined with the way in which the cymbals are shaped, hammered and anodized, finally produces a set of cymbals with a sound capable of cutting through the loudest of Groups or Big Band sections.
Although GIANT BEAT cymbals can be purchased individually, they are offered in tuned sets - Matched 15" Hi-hat, 18" Crash and 20" Ride.
GIANT BEAT cymbals with their distinctive SOUND, SHAPE AND COLORING are fast growing in popularity - try them soon you will be impressed."


The first generation of Giant Beats were printed with semi white ink (white labels) at 9:00 O'clock (see picture gallery below) starting in 1967 until early 1972.


The second generation of Giant beats featured Black ink (at 12:00 O'clock) and a slight change to the way they were stamped.


This series was a concept of multipurpose cymbals. Initially, they consisted of three sizes of cymbals and one size of Hi-Hats (15").

(*Originally, Paiste did not designate the type of cymbal with the exception of the hi hats (see Paiste profile 1 pictures below), in some advertising they labeled them "crash" or "ride". Ludwig listed the cymbals this way in their catalogs and not as "multipurpose".
(**The 18" was also listed as a "heavy" in Nick Mason's profile and Bonham's endorsement deal, see pictures below)

Giant Beats were stamped with serial numbers beginning in early 1972 (the same as the rest of the Paiste lines) through 1974. The numbering system follows the six digit "Swiss standard": first digit of the serial is the year of manufacture i.e. #3xxxxx was made in 1973. As a rule of thumb, if your Giant beat does not have a serial number, it's definitely a white label (pre 1972).
Also, If the printing is worn off your cymbal, there's two ways to tell the age: the emboss or stamp (early or late version, see above) or if it does or does not have a serial number.
If your Giant beat does have a serial number, it's either a very late run white label or a black label, it's safe to say virtually all black labels had serial numbers!

Bonham's use of Giant beats

He was by far the most famous drummer to use these cymbals, it's important to understand when he used them and on what albums and tours.
In an interview with Cozy Powell (they were friends and toured the English club circuit together), he states that in the late 60's both he and Bonham started using Giant beats (both of them had issues with breaking Zildjians, they didn't with Giant beats).
Cozy also states that Bonham was disappointed when Paiste discontinued the line, this may be the reason for the long delay (mid 1973) before he partially switched to 2002's (he still used a Giant beat ride up until 1976).
In a Freddy Studer interview, he states that Bonham had come to the factory in the late 60's (before he had an endorsement deal) and bought some Giant beats and 602's. When Zeppelin went on tour in the U.S. opening for Vanilla fudge (Dec 1968 through early 1969), Carmine Appice helped him get a Ludwig endorsement, most likely he got a new set of 602's along with his new drumset (Ludwig was the U.S. distributor for 602's at that time). You can clearly see Bonham using all 602's in the March '69 Danish TV performance.
It is generally agreed that Bonham "mixed and matched" 602's and Giant beats until his endorsement deal (see below) in Feb. of 1970.
Photos show that Bonham was using 15" 602 sound edges very early in 1970, he may have switched back and fourth early on between the Giant beat and 602 hi-hats, but after that it looks and sounds like the 602 sound edges were his main hi-hats until the "The song remains the same" U.S. tour in May of 1973 (he then started using all 2002's but kept the 24" Giant beat ride).


(*) This chart is based on data from various sources (mostly from picture evidence from live shows and audio examples from studio albums), we have made our best effort to ensure it's accurate but it cannot be guaranteed 100%
Special thanks to George Fludas for the Bonham cymbal research! 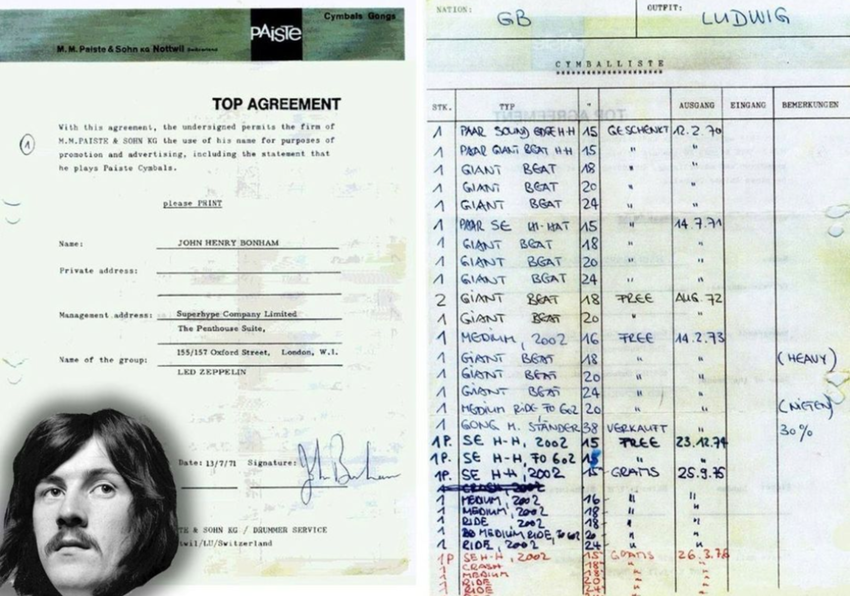 Bonham's Paiste endorsement and list of cymbals given to him by date, note: Paiste supplied Bonham an 18" heavy Giant beat in Feb. of '73