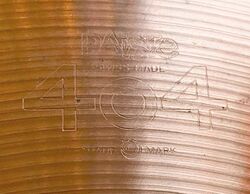 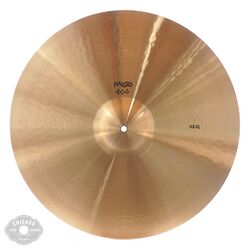 Introduction: 1978
Discontinued: 1986
Background: The successor to the Dixie series, Paiste 404's were released to the general public in 1978.
Early (1978) Swiss-made Black Label 404's have a single line hand stamp which was later changed to a double line stamp mirroring the 2002 logo, probably in the latter part of 1978.
German-made Black Label 404's always have a single line hand stamp. There are some German-made Black Label 404s with serial numbers, always starting with a "1" or "2"
(Black Label Swiss-made 404's did not get serial numbers). See "Deciphering German serial numbers".
The transition to the Brown Label silk screened logo begins in mid/late 1981 along with the other Paiste lines, although we have yet to document a Brown Label 404 with a 1981 serial number (this could be because there are a high percentage of Brown Label 404's out there with no serial numbers, see pics below).
At least some German Brown Label 404's made in 1983 have a logo variant with a hollow crescent moon and star. There are also German-made 404s from the 80s that have black ink in place of the brown. The only changes in the lineup from the Black Label to the Brown Label days was the introduction of the Heavy Hi Hats and Sound Edge Hi Hat.
The 404's were discontinued in 1985 (with some cymbals being made/sold into 1986 and there are a small number of 404s out there with 1988 serials) when Paiste released its new B8 lines.
According to an interview with Toomas Paiste, there were two reasons Paiste changed up the B8 lines in 1986:
1. To introduce the innovations in the 3000 line (new lathing, etc.).
2. To get the quality of the budget series in line with prices (more importantly according to Toomas). The 404's were "too good" for the price point Paiste was selling them for!


Rogers distributed 404's in the U.S. from '79 to '81 with very limited sizes (see 1980 price list below). Paiste took over when they opened their N.A. distribution center.


Quality: Entry Level to Semi Professional. Paiste 404 have a good sound, they project and give a true cymbal feel. Made with Paiste know-how, they represent quality at a small investment. Perfect for the demanding student seeking sound value. (1)

Production: These cymbals were fully hammered into shape, not stamped, the same production techniques were used as they were on the top line cymbals.


Applications: All applications, to include live and studio


Users: Beginner to intermediate drummers looking for something better than an off-the-shelf pack of brass rubbish that's still with their budget... Anyone looking for gig-able cymbals at bargain prices...


Sound: Not complex, but not displeasing to the ear... audio/video of a full set of 404's


1979 European catalog sizes listed below. (1981 model and size additions can be seen in brown:)

Marching (Special order in the U.S.)