Difference between revisions of "Paiste Formula 602"

Introduction: 1963ish (based on advertising and catalogs)
Discontinued: 1994 (based on serial numbers) then reissued 2011 to present
Background:

Innovation: First B20 cymbal made by Paiste. In 1976, the Formula 602 Dark Ride inspired a new line-up of dark cymbals in the Sound Creation series. The Formula 602 line also saw the introduction of the Sound Edge Hi-Hat and the Flatride.
Alloy: B20 Bronze, also known as "Bell Bronze".
Quality: Professional
Offered as: Formula 602 - Formula 602 Modern Essentials
Production: Hand/machine hammered and hand lathed B20 bronze.
Applications:

"The sound of your cymbals and the way they are put together distinguish you from other drummers. In Paiste production, it is decided in advance how the cymbals must sound. Also, whether they are going to be Medium Ride or Thin, Medium or Heavy, Paper-thin or Hi-hat cymbals. These cymbals are made according to precisely determined shapes and to measurements with an accuracy with 1/100 of a millimeter. Several technical controls have been built into the production process. These are executed by specialists, using appropriate measuring equipment. Nevertheless, only the trained ear of a drummer can be the final judge of the sound quality. Every cymbal that leaves the plant is flawless, both in material and in sound.
Each cymbal has to meet rigorous standards for sound characteristics and quality. There are 5 specific sound qualities from which to choose. The sizes most in use are between 16" and 20". The complete range, however, includes all sizes between 10" and 28".
SIZZLE cymbals are often discussed among drummers. The important thing is never to use a cymbal of inferior quality, since rivets will not make it better. You should first select the cymbal, MEDIUM or MEDIUM RIDE and then add the rivets. Six of these set about 1 1/4" from the outer edge, give a good effect. Upon request selected cymbals will be delivered with the rivets already mounted.
Many drummers own several cymbal-sets and more than one Hi-hat pair. They exchange these according to the music's requirements. Studio musicians require several sets as a matter of course."

Introduction: 1967
Discontinued: 1977
Background: The following description of the Seven Sound Set was printed in Paiste's 1969 catalog:
"A set of seven cymbals each in a new unusual sound-color. Sound colors the demanding drummer is looking for to enrich his personal cymbal set. Particularly, the SEVEN SOUND SET enables the studio drummer to fulfill the many and often unusual sound demands involved in modern recording and studio work."
Alloy: B20 (CuSn20)
Production: Hand hammered and hand lathed bronze. Fine tonal groove lathing
Applications: Jazz styles appropriate for the era (late 60's).
Sound: Similar to the standard 602's 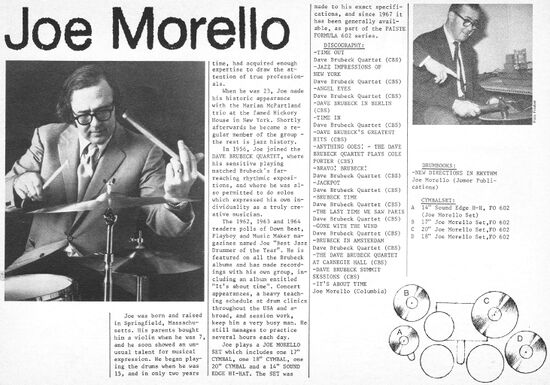 Robert Paiste had been experimenting with cymbals made of B20 bell bronze starting in 1957 when he first opened the Swiss factory (at that point it was a one room shop!).
It should be noted that Robert founded the Swiss factory across lake Sempach from where their future B20 alloy supplier "Metallwerke Dornach/Swissmetal" was located (Paiste had not used B20 alloy up to that point, little did he know they were the only foundry and mill that produced B20 bronze in all of Switzerland and possibly all of western Europe!). He initially worked with Swissmetal and developed a process of rolling B20 thin enough for B20 cymbal production, Swissmetal previously had not rolled it to such a thin specification but did have the equipment to do it reliably, Robert literally had to teach the foundry technicians how to roll the blanks to his thin specification with out cracking!
It is believed that Robert spent a couple of years refining the production process ('57-'59), sound characteristics and model names and sizes, this means that most likely the "Super 602" didn't reach widespread distribution until about 1959. This (new to Paiste) B20 alloy first came onto the market under the name "SUPER FORMULA 602".


The stamp of this series still looks very similar to the STAMBUL series stamp. The B20 "Super" with the "Stambul style" logo seems to come in two versions: one with Formula 602 label and one without (see below).


There are also two versions of a second style which looks like the Early Formula 602 stamp but has only the word "Super" written to the upper right, the second variation drops the word "Super", it also leaves off the words "Formula 602" (we call it the "plain stamp"), these variations are thought to represent the evolution of the trademark for the Formula 602 series just as it was coming out.


The name "Super formula 602" is believed to come from Robert making 60 attempts on the production/rolling process before he was satisfied, the "2" refers to it being made from "B20". It is also speculated that the "Super formula" term comes from the process that Swissmetal used to heat, mix and pour the alloy.
Note: There is an entirely separate series called Super which is not made from B20 alloy and came later. This has caused a lot of confusion over the years.
Sound sample: Super Formula 24" ride

This is the first true era of the Formula 602 series.

This early era is represented by just a few cymbals which have currently been identified. They have an embossed stamp which is distinct from the later ones.

It is relatively easy to spot the difference between this early stamp and the Solid and Outline forms. The Mixed form is a little more difficult to distinguish from the Early Stamp. The discovery of the early 60's logos illustrated in a catalog helped confirm the difference. The second confirmation came from the production years of the cymbals which have the Mixed form, the Mixed version is much later (1976-1981).

More than 99% of preserial Formula 602 cymbals have the Solid Stamp. It is present on 1642 out of 1647 preserial cymbals, compared to 5 Early Stamps and 5 Outline Stamps. The earliest example of the Solid Stamp is on a cymbal bought new in 1965. However, one example is not really enough to show us just when the Solid Stamp first started in use, and when the Early Stamp stopped being used.

Towards the end of the preserial era (1969 or so) we start to see cymbals which have some ink which is associated with the next period. The transition time to serial numbers is also when we find the 5 Outline Stamps. The ink can augment our understanding of the changes during the transition from the preserial era to the black label era, and which embossed stamps are used on which cymbals.

There are three different embossed stamps which are found in this era. This era represents cymbals produced from about mid 1972 to 1981. Almost all Black Label era cymbals have serial numbers but there are a few examples of cymbals from the early 1970s which have Black Label style ink but no serial number.

The Outline Stamp is used from just before serial numbers appear until the Blue Label era. If you see a Formula 602 cymbal with an Outline Stamp it is something like 99% likely to have a serial number. There are 71 identified cymbals with the Outline Stamp out of 459 Black Label cymbals. So the Outline Stamp appears on at least 15% of the Black Label cymbals. Please don't take this estimate as highly accurate because early on in data collection this distinction wasn't coded carefully in the database which was devoted mainly to getting weights and prices. Once differences in the embossed trademark became known data collection was amended, but there were already some years of data (2005-2014) which didn't have full information. There are also some cymbals where the seller doesn't give a decent picture of the stamp, or a decent picture of the serial number (and doesn't mention the serial number in the text). So there is lots of missing data.

The Mixed Stamp appears on "Transitional" Dark Rides from 1976-1977 without the Formula 602 on the bottom. It also appears on a few other Formula 602 cymbals in 1981 just before Blue Label era. So far every Mixed Stamp cymbal has a serial number, and this is another way to distinguish the Early Stamp (preserial) from the Mixed Stamp (1976 on).

During the Blue Label era (1981-1993) an embossed stamp was no longer applied. Instead Paiste used blue ink.

When the Formula 602 cymbals were reissued in 2011 they first came out with 8 digit serial numbers as seen on the last of the Blue Label cymbals. Very soon after this Paiste switched to a laser stamp which is on the bottom rather than the top. The Laser Stamp Era is also referred to as the Reissue Era, although once again there are a very few Reissued Formula 602s which don't have a laser stamp.

Information from: Steve Black, the majority of the individual cymbal model/size pictures courtesy of "Splash Baker" and her blue label collection.