Difference between revisions of "Paiste 2002 18" Crash" 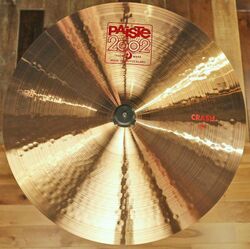 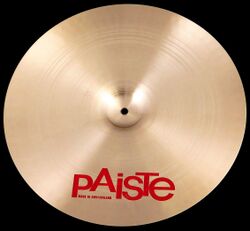 Group: Crashes
Type: Crash
Size: 18 Inch
Series: 2002
Weight: 1405g (Black Label), 1469g (Red Label), 1483g (1987 Serial Number), 1487g, 1496g (1976 Serial Number), 1499g
Years of production: 1971 - Present
Sound file: 2002 18" Crash
2002 18" Crash
2002 18" Crash
Paiste's Description: <<< - >>>
Review: This might be THE most AMAZING crash ever. It's a classic Paiste crash, and I have yet to hear a negative comment about it. I've owned it for a couple of years. I bought it along with the 20" ride and the 17" crash.
This is, like the other original 2002s, a great, GREAT rock crash. Paice stuff, Bonzo stuff, Porcaro stuff, Wilk stuff, you name it. But this is, like most current 2002s, also very versatile, and can be used in both heavier and lighter music styles than rock.
The stick sound is very FULL and WASHY. To me, this is exactly what a crash cymbal should sound like. I don't think it's particularly bright or dark. In my opinion, this is the CuSn8 version of the Signature full crash. It's not much left to say about the stick sound. Oh and it's GREAT. I recommend ALL drummers to check this one out.
The bell sound is bright. Not a separated character compared to the rest of the cymbal. I actually love the bell sound, but I never use it. This is a CRASH!!
Overall: Simply AMAZING, FULL, WASHY, versatile crash that should be included in all Paiste setups. A gem.
Review written by Viktors
Review: Well there has been a lot of reviews about this crash so I'll just add something, this crash sound so beautiful that if you hit it right and close your eyes you'll hear how it draws complex lines with the sound. It's like if the sound follows a path, very musical. It nothing like any cymbal I've heard before.
Review written by Chewaz
Review: THE 2002 Crash - This is what all drummers require in their setup. Warm, full-bodied, shimmery, bright, and cutting. This can be used in any style. This can even be used as a ride in jazz settings in small settings. I recommend this crash as anyone's 1st Paiste. If I were going to take one cymbal with me on a deserted isle, this one would be it!
Review written by Stranjluv101
Artist/song where it can be heard: Don Alias, Barry Altschul, Carmine Appice, Frank Beard, John Chester, Dave Lombardo, Beaver Harris, Lex Humphries, Nicko McBrain, Keith Moon, Cozy Powell, Phil Rudd