The major element in most cymbal alloys is copper, combined with one of three second components: tin (for bronze), nickel (for nickel silver, which also tends to have zinc added but no silver despite the name), and zinc (for brass). Although there are very small amounts of other elements usually contained in cymbal alloys, the major components give the alloy its name. Raw copper naturally contains a small amount of silver, but this is not really a "secret ingredient". In these days of modern laboratory analysis there aren't really many ways for "secret ingredients" to stay secret. Secret process yes, secret ingredients, not really. The only element which seems to get above the 0.1% level is phosphorus, which is found in Paiste 602 material. Otherwise it's mainly copper, plus some tin, zinc, and nickel. One wouldn't expect trace elements (< 0.05%) of silver or gold to have an easily detectable impact on sound compared to the effects of casting, rolling, cupping, hammering, shaping, and lathing. However, research relating sonic properties to slight differences in alloy has not been done. If it has been done and is available publicly, news has not reached the wiki yet. Meanwhile we will look at trace elements in some alloy samples after introducing the common alloys.

The shorthand way to refer to a bronze alloy is the amount of tin is mixed in with the main metal ingredient, copper. So B8 is 8% tin to 92% copper, and B20 is 20% tin to 80% copper. Note that the proportion of tin can vary up or down a bit from the ideal ratio and the alloy still meets the specification. According to Paul Francis the acceptable range of tin for a B20 alloy is 18.5% tin to 21.5% tin. B23 seems different enough to earn a different name. Maybe B25 deserves a different name as well. We will have a close look within the separate alloy sections.

The Brass and Nickel-Silver alloys do not fit into this shorthand naming Bxx for bronze because they don't use tin.

The easiest way to determine the alloy of an unknown cymbal is visually. Yes different alloys vary in color, L to R Tin % 8, 8, 10, 20

However, the colour may be difficult to judge in photographs. This is especially true if it is just one cymbal and the photo is taken under unknown lighting conditions. It is recommended that when trying to identify a cymbal that it be done in person. Comparing to a cymbal of a known alloy is helpful if one is not familiar with the hues of the different alloys. Here are a few examples of the ways in which colours can present differently for cymbals made from the same alloy. Cleaning changes the color as well.

Results from laboratory tests are more reliable and informative then color, but harder to come by.

B20 (CuSn20) tends to have a silver or white colour hue. It is more pale than either the B15 and B8 alloys. The copper in the alloy will oxidize when exposed to the three necessary ingredients: moisture, salts, and oxygen. Patina is viewed as a good thing or a bad thing by different owners. A more extreme from of oxidation called Bronze Disease is not so welcome, but seldom seen on cymbals.

Examples of B20 cymbals: A Zildjian, K Zildjian, Sabian, Paiste, Meinl, et al. Not all series, but most manufacturers have B20 offerings.

Test results on bronze cymbals: There are 24 tests on bronze cymbals which fall into the expected range for tin from 18.5% tin 21.5%. A further 7 cymbals came out with tin in the range 21.5% to 21.94% (so a little high). A further 4 cymbals were at the 22% tin level, and one Zildjian A Custom came in at 17.53% which is an anomalous low reading. Setting aside the one A Custom reading most of the Turkish / American alloys are testing out right around 20% Tin as expected (average 20.4%). Most Chinese cymbals (Stagg, Meinl Dragon) come in at 21% - 22% so a little above the other source countries represented (American, Swiss, Canada, Turkey)

In the photos of microstructure, material in the beta phase is the lighter colored blob, which contrasts with the background alpha phase of copper.

B23 (CuSn23) is an enriched tin alloy which is used in China, and in some (not all) Turkish brands. According to independent cymbalmaker Matt Nolan, "Having talked to Ken Cheng of Silken Cymbals, B23 is the mix used for hot-sledgehammered Chinese cymbals - i.e. the old school. Lots of the Chinese manufacturers are making Turkish style cymbals now using B20 and rolling mills." The lower range for what we call "B23" might begin at 22% tin, or maybe 21.51% to be just above the expected range for B20.

Examples of B23 cymbals: the original Dream Contact cymbals, UFIP Firma (subject to further verification -- they were certainly said to be some enriched Tin), Masterwork (based on testing -- the advertising says B25)

Test results on B23 cymbals: An Istanbul PreSplit Mel Lewis 21" cymbal tested as 23% tin, and the Masterwork sample at 23.14%. One Roberto Spizzichino cymbal tested at 23.3% and those blanks are said to come from either Agean or Masterworks. Also in the range 22% to 23% are one of two Meinl Dragon samples (22%), a 1930s K Zildjian Istanbul cymbal (22.2%) and a New Stamp K Zildjian (22.2%) but before you get excited about B22+ being "the secret" of Old Ks, other K Zildjian Istanbul samples come in at 20.72% and 21.53%. It's also worth tempering your enthusiasm for "the secret" being extra tin given an A Zildjian from 2013 which was also 22.2%. Looking at the relationship between the percentage of tin and hardness (Vikers Hardness Test) there is some relationship (adjR2 = 37%) but that still leaves the majority of the differences in hardness (63%) as due to other production factors than the percentage of tin. So other factors have a majority shareholding in the hardness of the finished cymbal. Some of these are discussed below in the section on B25. 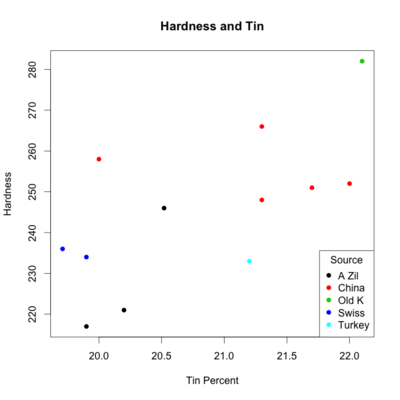 B25 (CuSn25) is another enriched tin alloy which is used in Turkey and China. A true B25 may have almost all beta phase present (or a significantly larger proportion in beta rather than alpha) but that hasn't yet been established in laboratory analysis. In the phase diagram for copper tin alloys there is a small region where at a particular temperature and tin concentration there is a zone of beta formation. It lies at 25% tin and 600 to 800 decrees C. 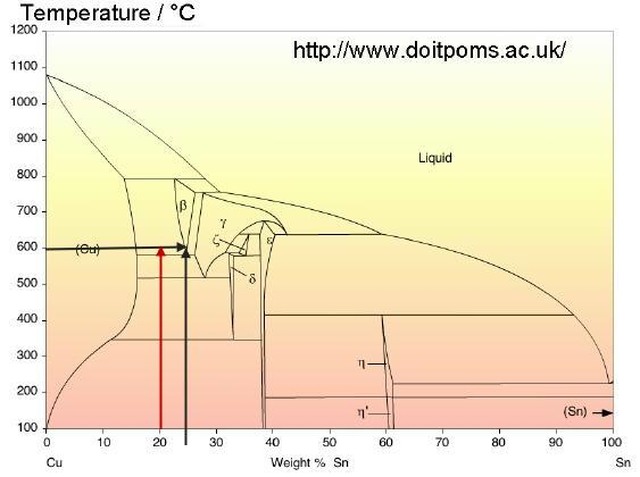 This phase diagram has been interpreted by drummers as evidence that B25 is going to be special and different. The fact that material in the beta phase is distributed throughout plain old B20 demonstrates that there is more to beta formation than this simple interpretation of the phase diagram would suggest to drummers. There are lots of complexities in the process, and non linear relationships between tin concentration and melting temperatures. These factors interact with how long the metal is held at different temperatures and the details of annealing. As Matt Nolan says "The phase diagrams only show the equilibrium state for alloys at that temperature. The metal must be held there for enough time to reach equilibrium, or it can be somewhere else. Percentages, heat treatment (temperature and time) and cold working (and even ageing) all change the crystal structure. The only way to be certain what is going on in your sample is to look at it under the microscope. Old Turkish Ks have been observed to contain Alpha phase and Beta phase. In equilibrium terms, this is the region on the phase diagram to the left of the Beta inverted triangle." (Cymbalholic 2017)

There are a number of Turkish manufacturers who claim to use B25. It is possible that the recipe they follow starts with tin as 25% of the copper by weight, but by the time the material is fully cooked the proportions have shifted. Laboratory analysis has so far shown that the reputed B25 may be closer to 23% tin than 25%. This raises the question of whether it should really be seen as just B23 with a range of 21.5 - 24.5 and simply falling at the upper end of the range.

Test results on B25 cymbals: The only cymbal in the entire set which tested out at true B25 was a Whuhan Opera Gong. Tests on Agean, Masterwork and V-Classic show that they aren't B25. The one Masterwork sample is 23.14% tin. The Agean came in at 21.17% tin (middle of the field rather than enhanced), and the V-Classic at 21.2% (same middle of the field). Comparing these last two with the B23 summary suggests that not that many cymbals actually are B25, although not that many tests have been done on reputed B25 cymbals compared to the reasonable sample size we have for B20 and moderate sample size for B23.

A final note on the properties of the extra tin which is sometimes seen as the "magic bullet" which will create a harder alloy and the "old K" sound the last word goes to Matt Nolan "Oh, and that Opera Gong clocking in at B25 - I hammered it - soft as butter. More Tin does not necessarily mean harder alloy. There is much more to it than that." (Cymbalholic 2018)

B15, or Proprietary Signature Bronze (PSB) alloy (it goes by a few names), can be identified by lusterous yellow colouration. Like all bronze, it can develop a patina in the presence of moisture, salts, and oxygen. The patent for Paiste Signature Alloy (US patent number 4809581 filed: July 13, 1988 granted: March 7, 1989) actually covers B13 to B18, narrowing down to B15 as giving the best results.

Examples of B15 cymbals: Paiste Series Signature, Sound Formula, Signature Traditionals, Signature Dark Energy, and Visions (certain models). This alloy is now out of patent and Zildjian experimented with a series called Project 391 in B15 in 2014.

B8 bronze (CuSn8, aka 2002 alloy in Paiste terminology) has a noticeable orange hue to it. This is readily seen in clean cymbals, but is also present in cymbals that have developed a patina. Patina is viewed as a good thing or a bad thing by different owners. Paiste decided to make cymbals from B8 in 1963. The lasting success of their 2002 series (and many other cymbal lines) justifies this decision. The sound character of B8 is less neutral and more focused than that of B20. This is why B8 cymbals feel louder and more cutting to some drummers.

B12 bronze is an intermediate tin level between the more common B8 and B12. Examples of cymbals done in B10 and other tin concentrations also exist, but this gets back to the question of whether to treat them all separately or as just part of a continuum.

Brass (CuZn) cymbals have a colour similar to B15 although lacking the luster. They also feel lighter and warmer due to the density and thermal conductivity of the metal. Brass has a reputation for being a material which is not used for high quality cymbals, but there are some cymbalmakers like Manabu Yamamoto who create high quality hand hammered brass cymbals. So the material is not the sole determinant of sound. The material is just one factor in cymbal sound. How the material is worked is another, maybe even a more important factor. The host of different sounds found in B20 cymbals demonstrates how other factors can influence the how a cymbal sounds.

Cymbals made of nickel silver (NS12) have a steely silver colour. This colour tends to be more sterile looking then B20 alloy, resembling steel in many cases. Nickel silver is known for not corroding easily and may only have a light surface patina, rendering them more of a grey colour. If exposed to moisture, they will not develop the blue/green oxide indicative of cupric alloys.

Cymbals made from steel have been made by some of the smaller cymbal producers. They do not make up a large proportion of the cymbals made.