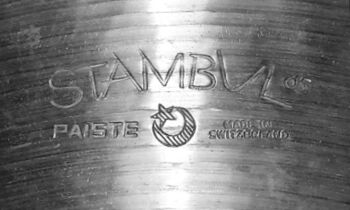 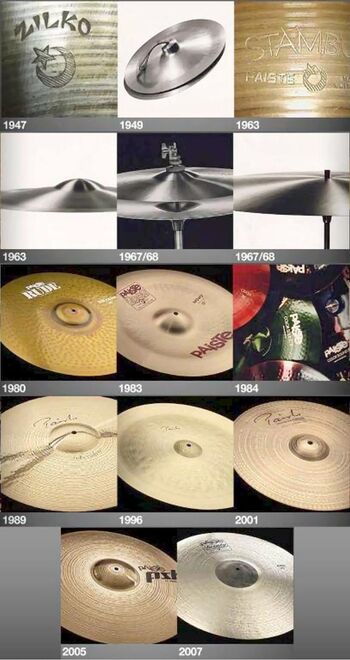 Paiste's timeline shows the Stambul65 released in '63, but we believe that was when they 1st. started to experiment with B8, we don't see them show up until the 1965 catalog.

Introduction: 1965
Discontinued: 1974
Background: The Stambul65 was Paiste's first series entirely made of the B8 (2002 bronze) alloy.
Robert Paiste had started to experiment with B8 alloy as early as 1963, he was looking for a better sounding replacement for the then currently used NS12 (Nickel silver) alloy. B8 is an industrial alloy used in bearings bushes and sleeves, it is readily available from many manufactures.
He first produced the "Stambul 65" in 1965 as an an upper midline series that was originally intended to replace the Stambul series (it did not, both series ran concurrently).
This series was an important development that paved the way for the groundbreaking Giant Beat line and subsequently, the crowning achievement of Paiste’s use of B8: the legendary 2002.
Because of the name "Stambul", the ‘65s tend to get lumped in with the regular "Stambul NS12" line, they were two different lines sold concurrently by Paiste in the mid 60s through 1974. The lines had two completely different emboss logos and the weight/type designations for each series were also different, they did share some construction similarities such as the shape of the bell and style of lathing. The more expensive Stambul65 was considered an upper class, mid-level cymbal bordering on professional quality, while the Stambul NS12 was strictly a middle class offering as was the later B8 version.
Out of the two Stambul series, the 65 was discontinued first in '74, possibly made redundant by the release of the all conquering 2002 in 1971 (the Giant beat was also discontinued at the same time). The regular "B8" Stambul carried on for a longer period before eventually being replaced by the new 505 series in 1978.
Stambul65's were made in both Switzerland and Germany (especially the marching cymbals). In addition to the emboss logo, 65's made after 1971 will have a black ink Paiste logo and series name stamp at the 12 o’clock position above the bell and, the red ink type stamp at 3 o’clock (no matter the year of the production) and the size in inches under the bell in red. Normally there wasn't the Paiste "outline" logo stamped on the bottom of the cymbal, but we have found one example (see pictures below).

Innovation: Paiste's first line made solely from B8.


Production: Cymbals were fully hammered into shape, the same exact production techniques were used as they were on the top line cymbals (Giant beats & 2002's).


Applications: All uses appropriate for this quality of cymbal.

Nils Lillig is the premier Stambul65 collector in Europe, he owns a vast assortment of cymbals from this line along other lines as well. Over the years he has compiled a weight chart of all the "65's" he has encountered, you can find his list here.